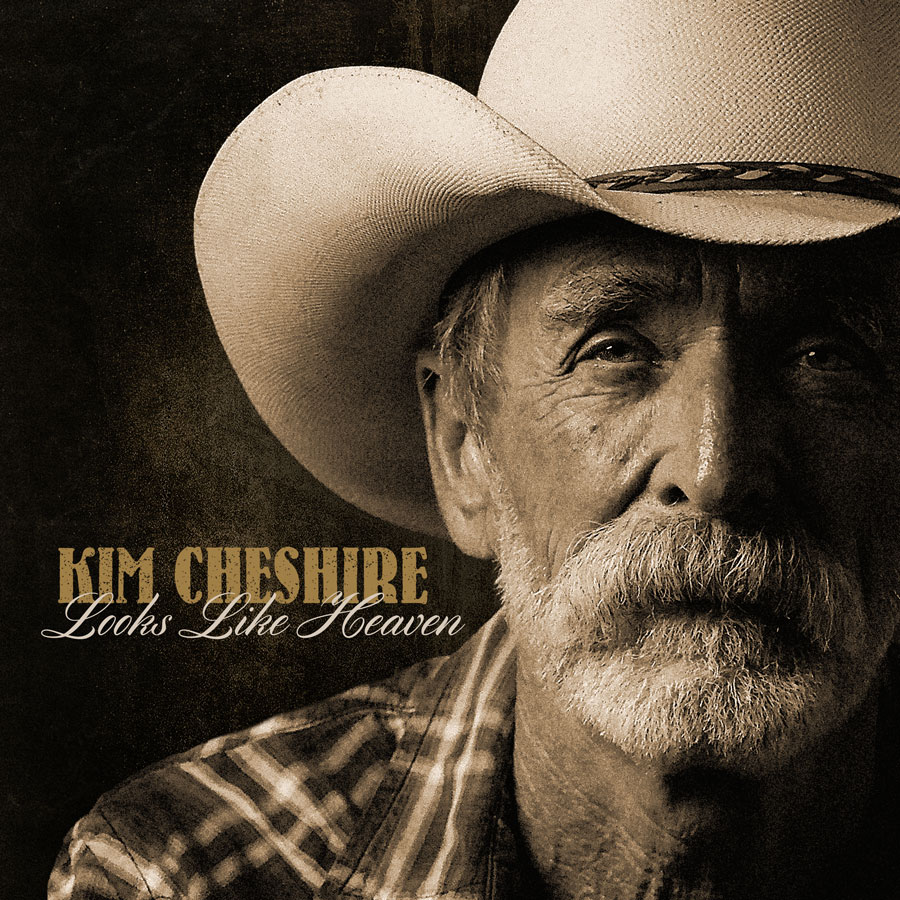 Kim Cheshire – voice of alt country pioneers The Danglin’ Brothers and Golden Guitars winners The Wheel – reminds us that it’s all about the quality of the songs and the performances on his new album Looks Like Heaven.

Kim’s last record, 2010’s Dead Man’s Shoes, was an artistic revelation for the singer-songwriter. With the support of producer Glen Hannah, Kim trusted himself completely to the integrity of the songs like never before. Like all of us, Kim was shattered by Glen’s death two years ago.

“Glen was about the integrity of the art and the message expressed and how nothing should get in the way of that intention,” says Kim.

The recent death of his mother prompted Kim to release his grip on a fistful of unreleased compositions, entrusting them to his old band-mate Rod McCormack, though they hadn’t worked together for twenty years. Since The Wheel, Rod has become one of the most successful and respected writers and producers in Australian country music. Rod not only loved all the songs Kim sent him, he asked for more!

Kim and Rod spent a working week in the studio that felt “completely effortless.”

“I’d forgotten how musically connected we were and it was a surprise and a delight to discover it again together,” says Kim.

Kim’s voice has never sounded so pure, so invested, and he attributes that to his joy in reconnecting with Rod:

“It was incredibly special and I can hear it in the end result.”

The pair were so happy with their work, they decided to widen the circle. Rod pointed out that a good portion of their US-based associates were sitting around in COVID lockdown. Some of the songs were sent across the world and one-by-one returned more gracefully grown than Kim could have imagined.

That’s What’s Wrong, featuring country’s sweetest sounding couple Shanley Del and James Gillard is all soul and heartache in the tradition of Memphis songsmith Dan Penn. Some of the album’s hottest acoustic picking drives the southern fried country funk of Like A Fool with Newcastle’s Lily Lewis shining on backing vocals, and Nashville’s McCrary Sisters’ gospel inspired vocals take Have Mercy  all the way down to New Orleans; Jeff Taylor’s accordion takes Stoneage Romeo even further – across the Tex-Mex border, and Half The Man would be half the song without Andy Leftwich’s weeping fiddle. There’s even an instrumental, Uncle Jim, on which Kim leaves the playing entirely to McCormack and Leftwich. Tim Crouch, Templeton Thompson, Camille Te Nahu and Kym Warner all make valuable contributions

Kim’s writing on Looks Like Heaven is at its most honest and the song-driven performances make for a timeless and disarmingly uplifting record.

2. Another Day Goes Down

This album is dedicated with LOVE to my Mum Beryl May Wright (1931-2020) and my step father George Stanley Wright (1937-2009); both beautiful souls who gave me the opportunity to be the man I am and to live the life I’ve lived, I will remain forever grateful.

Looks Like Heaven was inspired by a TV interview I saw years ago with a little old lady reflecting on her recent near death experience and how, along with a very twee and distinctly earthbound description of the heavenly realm (on earth as it is in heaven….maybe?) she shared her personal meeting with Jesus and his twelve disciples.

I watched that interview, went to bed and woke up the following day ruminating on what she’d said, and thinking about my own mortality, that rumination became Looks Like Heaven

Another Day Goes Down

Ninety five percent of my co-writes are started by me on my own but self doubt and the fear of repeating myself and ruining my own ideas often leads me to bring in a collaborator. I’ve had a few different co-writers over the span of my musical life but none as rewarding and consistent as the treasured relationship I have shared with my dear friend, the very talented Kevin Bennett.

This song was one I brought to a songwriting session with the idea of exploring alienation within the intimacy of a loving relationship. Grief from a devastating loss can manifest in a variety of ways for different people and can disrupt and complicate even the most intimate of relationships, often leaving both sides reeling, feeling alienated, misunderstood and disconnected. These are delicate situations to understand and to navigate for even the most engaged and compassionate people. Yes, life can be immensely difficult at times but if we can face our dilemmas in an open and honest way, I believe we have the opportunity to blossom more than we’ve ever imagined.

After arriving back in Australia in March 2020, I borrowed a guitar to stop myself going stir-crazy in quarantine. Have Mercy was a song I started writing ten years ago with my long time songwriting buddy, Kevin Bennett. We were trying to capture the essence, using humour, pathos and compassion, of that age old dilemma of reconnecting romantically following the demise of a long term relationship by trying to both acknowledge our mistakes and our misgivings while at the same time discovering how to move on. A humbling and challenging dilemma indeed.

Another relationship dilemma song, not usually my favourite subject for songwriting but I do prefer to give my intuition and my muse free rein to offer up suggestions for song topics rather than have my creativity driven by my more conscious motivations and agendas.

Like tapping into someone else’s internal dialog about their most intimate doubts. fears and insecurities, this song tries to capture elements of miscommunication, fear and long term habitual ennui. A bit like mulling over all of the things you’d been too scared to verbalise, in a vain attempt to grasp years of unspoken feelings, minor resentments and unresolved hurt that could have all been avoided with open honest communication…. but sadly wasn’t.

This song was written back in the eighties during my time with inner city alt/country band The Danglin’ Bros and was attempting to see from the perspective of a working class kid in a soul destroying  production line factory job and dreaming of a life of freedom…….my personal experience at about 18 yrs old. It’s all about wanting more out of your life and feeling used and taken advantage of and then realising that you can actually change your life if you’re brave enough to risk it and understand that you’ve just been following the crowd.

I wandered down the street early one morning after a big night during the Tamworth Country Music Festival. I was after some breakfast ingredients from the supermarket, it was eerily quiet and deserted, the only people on Peel St were a family of five, Dad, Mum and three kids, two in a stroller and one in Mum’s arms. They were about 20-30 metres away and ambling along when what appeared to be a disagreement started between the parents, as far as I could tell it was something to do with the kids, it escalated quickly and I witnessed the man still with his back to me lift his right arm and hit the woman so hard in the face with the back of his hand, she momentarily staggered, looking like she might fall but because her concern was for not dropping the kid she managed to stabilise herself. A few more harsh words were blasted back and forth between them as the continued ambling along, it seemed like this was probably a common occurrence. I didn’t know what to do, I was in a state of shock and thought I should do something. Being a skinny pacifist with limited fighting skills and the guy being big, aggressive and volatile, I figured a confrontation was not the best course of action and immediately went looking for help, I had no mobile phone on me and found a checkout person who called the cops and I headed back out onto the street to see where they were, they were gone! I went back to the supermarket, got my stuff and waited for the cops but had to leave before they arrived, I had to eat and get to a meeting and left all of the details and my number with the checkout guy…..I presumed that they eventually arrived, no-one ever called.

It was my first experience of domestic violence, it was brutal, casual and shocking for me to witness, it lingered in my mind and later that day I started writing Stoneage Romeo. The song ended up being more about another situation of domestic violence that I became aware of much closer to home but the initial catalyst was that fateful morning in Peel St, Tamworth.

The only instrumental I’ve ever written was conceived in a single car journey following a gig in Windsor to my home (at the time) of Berowra. I was playing in a band called King Horse in the early 2000’s and we had a residency in Windsor and I would usually drive home on automatic pilot, lost in a post gig reverie of ringing ears, musical highs and lows while stinking of cigarette smoke, cheap perfume and stale beer. I’d barely ever remember the ride but this particular evening

my mind became focussed on a melody, I sang it over and over and as I do particularly when I’m developing a melodic structure and driving. During the course of the hour’s journey I arrived home with a pretty well developed piece. I made a cup of tea, picked up a guitar and started to figure out the supporting chord structure whilst singing the melody. It never felt like it was something that suggested lyrics although there were a few attempts over the years but it was determined to be an instrumental. Even with it’s distinct European flavour it always felt to me like a theme for an imaginary British sit-com or soap. The recorded version on my new album Looks Like Heaven beautifully realised by Rod McCormack and Andy Leftwich sounds to me like the theme music for an imaginary documentary on The Cheesemakers of France…..any takers?

Hole in My Heart

Unusually for me this song was instigated by my (Austin Texas-based Australian) co-writer Carol Young, she gave me a few lines of lyric and a rough idea of the tone of the song and generously allowed me to take it and develop it. I’m notoriously slow but over a few months I wrote and rewrote many sets of lyrics, trying to capture the genuine sense of hopelessness experienced by people who have attempted to bury their hurt, especially those misunderstood childhood emotions, transgressions and sadly sometimes…..abuses. This can often result in a deep and dark form of self loathing that’s incredibly hard to undo but forgiveness is the key.

Half The Man He Used To Be

Another song started by Carol Young and given to me to develop further. The protagonist is a broken man, after a long term relationship is terminated by his partner he is unable to come to terms with his loss and falls into despair. This subject has been a common theme throughout my songwriting for many years now, probably since I experienced a similar situation myself many years ago.